We are halfway through our 4 weeks of 3 separate tracks for Youth Group! Keep reading to find out what we did in Sticky Faith, I’m In, and Confirmation!

Members of Crash Landing started their time together at Race City Escapes in Mooresville where they traveled back in time to help a P.I. rescue a kidnapped singer from a 1920’s speakeasy. Escape was the theme for the night as they dove into another chapter of Sticky Faith to think about what their faith will look like once they’ve escaped high school. This week’s conversation focused on how embracing our struggles and problems can draw us closer to God rather than pushing us away. Seniors were able to connect their own personal stories of struggle met with prayer to seeing their faith deepened.

Last night we talked about James, brother of Jesus and member of one of the most intense sibling rivalries of all time. How do we know? In John 7:5 we find out that James didn’t believe that Jesus was the Messiah! Our best guess about why that was is that Jesus was a bit of a rule breaker (healing on the Sabbath, hanging out with the unclean) and that was more than a good Jewish boy like James could take. But something changed after Jesus died and rose again and, as a result, James went from being “out” to “in.” Fast forward a bit and James is one of the key leaders in the early Church and he gets the last word in an important decision about whether or not new Christians would have to be circumcised. His decision reflects the love and grace that Jesus showed James when James eventually admitted he was wrong about Jesus. It also reflects the shift in James’s priorities: from rules being king to something new: 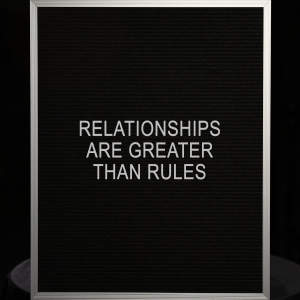 This does not mean that rules don’t matter, it just let’s us know that relationships have to come first. We live this out by not counting ourselves out when we can’t maintain perfect behavior and by not counting out others who are, like us, imperfect. Jesus loves rule breakers and rule keepers equally and we have an obligation to do the same.

This week Confirmands began by a bit of a debrief of worship at Davidson Presbyterian Church earlier that day. That was followed by Confirmands and leaders diving deep into the next line of the Apostles’ Creed (“Suffered under Pontius Pilate, was crucified, dead, and buried; he descended into hell; the third day he rose again from the dead”) by having each Small Group focus on Jesus’s life and ministry, Jesus’s death, or Jesus’s resurrection:

After all that the 3 Small Groups came together to share their findings with each other.